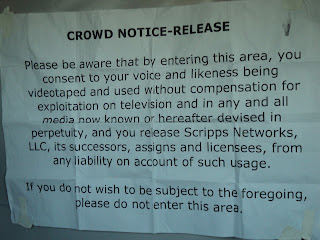 Restaurant Impossible has come to town, and we were there for the reopening!  I had never watched the show until I learned they would be here, but daughters Jenny and Julie have; and they were quick to get their husbands plus Larry and me reservations for dinner tonight at the reveal. 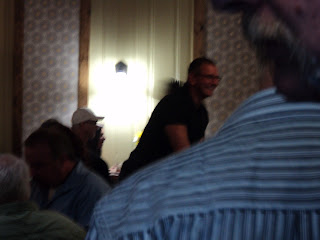 Robert Irvine is a doll.  On TV I think he comes across as pretty brutal.  However, he is so personable and charming in real life.  He worked the crowd like an entertainer, and he even spent a few minutes chatting with granddaughter Gigi who is just 11 months old.  And yes, those muscles on his arm are real and huge! 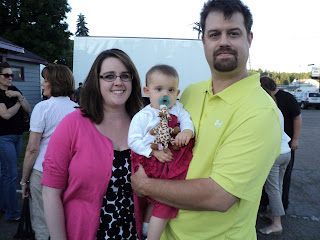 Our dinner reservation was for 8:50, but we never got seated until after 9:30.  By then Gigi, who is normally a night owl, had had enough; so Jenny and Randy took her and left for home.  And because it was so late, we ordered appetizers and salad so we could get out and get home ourselves.  Larry had a deep fried salmon cake, and I had shrimp corn dogs.  Both were delicious.  We also each had a cup of sweet potato bisque - excellent.

While we were seated inside the restaurant, Robert asked the diners to be quiet and then asked if anyone in the building had ever served in the armed forces.  There were a couple of veterans, and he thanked them for their service to our country.  We all applauded for that really nice gesture.  Then there was a priest standing in line, and Robert asked him to say a blessing for the food as well as for the workers.  Outstanding!

The restaurant was full, and people  were really enjoying themselves.  The wait staff seemed to be pretty overwhelmed.  We had three different waitresses, and our food was not served all at once.  But I imagine these past couple of days were crazy for them with the work and the excitement.  I'm sure once things calm down, they will have things figured out. 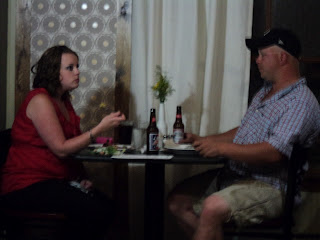 The restaurant is Michelle's in Corry, Pennsylvania.  I really hope that this professional advice from Robert combined with the outstanding publicity will help turn things around for the owners of the restaurant.  The food seemed to be rather high brow for this blue collar town, but hey - who doesn't need to be classed up!

I am still utterly fascinated by that legal disclaimer.
Phrases like "in perpetuity" and
"If you do not wish to be subject to the foregoing, please do not enter this area"

Wow! What a fun post! And to see Robert in person! I have seen his show, and he's pretty aggressive. I hope the restaurant he helped will do well. If I lived anywhere near there, I would love to try the new menu.
What a fun time you must have had, even if you ordered less than a meal!

I am sure this was so much fun! I have watched the show many times. Robert does have huge muscles ... glad to know they are really big :)
Hugs,
Donna

I was wondering who got to go! Sounds like fun and we have watched several episodes of this show.

Oh my gosh, that sounds so fun! I love that show. Being able to actually take part would be thrilling.

Great review, I was one of those veterans, and he actually sat at our table for a while a few times. With that I learned Chef Robert served in the military for his country, and he was the personal chef for 5 of our presidents. Amazing! My daughter Caitlyn "the one with the bad steak" made an impression on the "before" shoot of the restarunt and we were asked to return the following night, and because we were were were front of the line fore service. The food was amazing, I had the cob salad, we retried the steaked, and had a salmon cake appetizer (which was amazing) but it was taken off the menu the next time we visited because the chef they hired never came back after that night, and they were back to the drawing board with the kitchen. I love the place and plan to return again.