The Extreme Makeover - two of them!

Yes, it's me, and I'm loving the new look of my blog!! See what happens when you let your kids take over. My daughter Mandy recently updated her blog and even gave it a new name. I was very impressed with her work. Then daughter Jenny got on the bandwagon and asked Mandy to redecorate her blog; and she's sporting a new name, too. Mandy has always been pretty arty, so I had no problem allowing her to give me a new look as well; and I'm so excited about how it all turned out!

Now I have often said that I quilt, but you know that I rarely post pictures of my quilts. When three daughters lived in this house, I was sewing and quilting all the time and cranking out quilts left and right. Now that I have more time, I don't get as much done! Go figure. Anyway, here are three of my favorites in the header.

And if you check out my profile, you'll see that instead of the "gray head" as Mandy called it, there is a picture of buttons. Isn't it cute! So now when I sign up to follow a blog, there will be the button picture instead of the gray faceless picture. As a joke, I showed Mandy and Jenny this picture and wondered if we should go with this one: 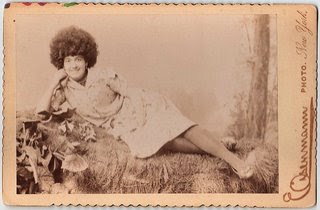 No, it's not me - who in the heck would have their picture taken like this anyway!

Now for the other extreme makeover. I don't watch much television. Really. When Larry and I relax in the evening, he's the one with the remote. We watch a lot of Christian television and a whole lot of the Golf Channel. Reality television? No way. When people at work are talking about who's dancing with the stars or who got voted off, I don't have a clue. I caved once and bought a CD by someone who won American Idol, but I can't even remember his name at this point.

Anyway, I do know about the Extreme Makeover; and it was in nearby Erie this past week tearing down and rebuilding a new home for Clara Ward. You can go here and search Clara Ward to read all about it. The media in the Erie area has often said that the people around here are givers; and when there is a need or a fund has been set up at a bank, the people give to help out. And for Clara Ward, there was no exception. Not only did ABC generously give, but a local college, businesses, and individuals have shelled out tremendously in this situation. Because Clara lives in a poor neighborhood (a house across the street is listed for sale at $26,000), even some of the neighboring homes were spruced up outside by volunteers. Last I read in the paper, $1.2 million so far has been poured into this project including the cost of the house, meals for volunteers, scholarships for Clara's "kids", and the list goes on. The date for the airing of this show has not been named. I will let you know when I hear. This is one show I know Larry and I will watch.

I see that I'm nearing the 100th post on my blog. I will be having a give-away, so please check back. The give-away on Sew Mama Sew was so much fun for me; I hope you'll like what I've come up with for this one.

Today is sew day with Audrey and Melissa. This is what Audrey and I have been working on: 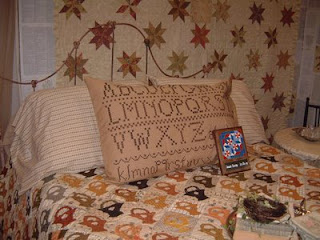 We're both just about done with the sampler, and the pillowcase itself will be easy to sew up.

Mary oh Mary, your new blog site is so pretty, at first I had to double check, had I clicked into the wrong site...LOVE IT!! That Mandi is on a roll with *do-overs* what a gal (she is a sweetie)! Have a wonderful day, I am with you on the reality TV, I don't know a thing when othrs talk about the shows, I just listen! Now Extreme Makeover I watch that show, and most often cry right thru it, so let us know when the special one is on from your area! Have a wonderful day, God is Good!

Mary~
I love your new look! How fun!
What beautiful work you do.

Oh my word, you are funny. I love the look of your blog and the buttons photo is great.

What a great idea to use thread to surround a candle. I may have to become a copy cat!

I love the new look. It's so you, but I really think you should have used that crazy hair picture as your profile pic. Wouldn't that have gotten some people talking.

Your blog looks great! My granddaughter helps me with mine! I love that BBDesigns pic and have wanted to make the sampler pillowcases. Instead, I bought the fabric when it came out! Your header quilts look wonderful! Thanks for visiting my blog!

I just don't know how I missed this post! I love your new look though. So nice. Just been busy with the parents!
Blessings!

Oh my goodness....I love the picture you have on this post!!! The quilt and the pillowcase are GORGEOUS!!!! LOVE it! :)

I am going to add you to my fave blogs and will be back to visit! :)