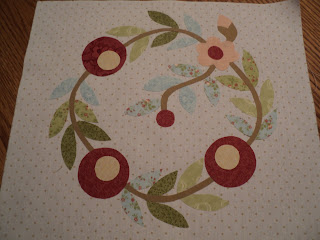 With apologies to Melanie and Sue for being late in posting my block, here is Block #3.

When I started quilting years ago, I saw a picture of a Bridal Wreath block that I thought I'd make someday. Larry and I were engaged, and it just seemed like it was appropriate. But the applique held me back; those were the days when the only fusible web was Stitch Witchery which was a bugger to work with. I didn't have the patience to do the handwork. A full-sized quilt done with just several of these blocks would be just beautiful, I think. Maybe someday......

So life goes on here following Larry's heart attack. I still can't believe it happened to him; he's 56 - seems so young to me. The same time he had his, Audrey told me of someone she know that suffered a massive heart attack. She was 44 and subsequently died. We've had a ton of company and phone calls since his attack; and more and more we're hearing of people with stents, people who required surgery, and those who didn't survive.

We've made changes to our diet, and we're exercising more. He's struggling with quitting smoking; I'm praying my heart out that he will. A year ago at this time, he would have been at the golf course or the driving range every day. Now he hits a few balls into the field behind our yard. My sewing has taken a back seat as I sit on the deck to keep an eye on him. And will I ever quit running to my office at work when the switchboard operator tells me he's on the phone?! I'm sure things will settle down eventually; it'll just take time.
Posted by Mary @ Neat and Tidy at Saturday, June 04, 2011

I'm glad to hear that Larry is doing better. Hang in there! Things will settle down and life will get back to normal soon.

My husband had a heart attack in his mid 40's. He had stents placed and then ended up having bypass surgery. I can understand your nervousnous now. It should get better over time and you won't think about it so much.

It will take time but I'm so happy to hear that Larry's doing better. I hear more and more of people with heart problems and thank goodness that medical science is what it is today.

Your block looks beautiful. I hated that Stitch Witchery stuff too.

it's so understandable you're worried about him, but I think it will become better by time too. Good luck with that and your DH with quitting smoking!

Hello My Sweet Friend~
It was so good to hear from you you. It has been beyond busy at our home.

Hope you have a wonderful Lord"s day.

I'm glad to hear of Larry's progress. My SIL had a heart attack Friday night...she had stints put in then and 3 more today. She will be in the hospital a few more days...it's weird. I always thought a heart attack was quick and was over like that...I learned alot. Chris is 62.

Glad to hear that Larry is behaving and on the mend. It is a very scary thing and I'm sure it will be a long time before you just stop keeping an eye on him. Thanks for the use of the pattern. I gave it to Julie yesterday in Sunday School to return to you. So glad to have her in our class. Happy when I see her smiling face and she didn't have to work!
Have a good week.

Mary, your block is wonderful! I love those fabrics. Don't worry about being late. I didn't make it with mine either. I'm still working on it. Been way too busy to be in the sewing room.

Still praying for you and your husband. Hope all is much better now:)

beautiful as always! i've been thinking about and praying for your family. i owe you an email! :)

Block is gorgeous! So glad to hear that Larry is doing well!

I am so glad to hear that your husband is doing better. I'm praying that you will be able to not be fearful and to find a new normal. Your love for him shines through your words. The block is beautiful as your work always is! Blessings to you both!

OH, your block is lovely with those blue leaves. Glad to hear your hubby is doing okay.

So sorry to hear about Larry, but thankful that he is okay now! Yes, you will watch him like a hawk for awhile and always be on him. It will ease up over time, but never completely. My dad had a heart attack and my husband has heart problems... starting when he was 36 so I know somewhat how you feel. It's just in our nature to worry but it's okay to keep an eye on him at all times.

I'm way behind on reading your blog, hoping to catch up. I hope you have a wonderful week~

Thanks Mary for visiting my blog. Sorry to hear about your husband's heart attack. Praise God he is still with you. A verse that is of great comfort to me is: 'trust in the Lord with all of your heart, lean not on your own understanding, in all your ways acknowledge HIM, and he will direct your paths.' God is still God, and God is still good. Bless you sister!

Mary, I'm sorry to get here so late to hear about Larry, but I'm extremely relieved to know that he is recovering and hitting golf balls again. Fortunately, I have a good story. My dad had a massive attack in '91 (triple bypass) and lived until '09, eight years passed the doctor's prognosis. I am praying for Larry's time to be extended way beyond the prognosis. Blessings to you all! The block #3 is beautiful!

Mary, I know you must be feeling anxious all the time - but, it will settle down - I'm just glad Larry is doing so much better...

Love your block - it is very pretty.

I'm glad to hear that Larry is doing better. I'll pray that he stops smoking, too. My aunt lost her leg about five years ago--she's 60 now--because of complications from being a heavy smoker. She can't quit smoking--just refuses to.

Your block is wonderful!

Love your block ...I still want to make it myself!
So glad you hubby is doing good :)
Hugs,
Donna

Goodness! You've had quite a scare. I'm glad that all has turned out well for you and your husband. I don't blame you for being overly cautious just now.