Is there a Santa Claus? 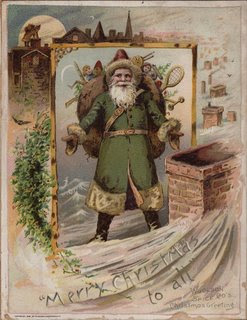 When our girls were young, Larry and I made the decision that we would not push the Santa Claus idea onto them. We were honest and told them that Santa was for fun but that Christmas was Jesus' birthday. Some people were horrified with that decision. My thought was why lie to the girls? And then what else would they think we were lying about? So no there was Easter bunny or tooth fairy either.

I think they survived childhood successfully without Santa and the other guys. We allowed them to sit on Santa's lap and tell him their wishes. I decorated with primitive Santas at Christmastime. But the emphasis was on the birth of Christ.

The girls are now born-again Christians and are married to Christian men. I have no regret for not raising them as Santa Claus believers. Through the years I jokingly told them that they turned out great despite having us as parents. I guess that rings true with the Santa Claus theory as well.
Posted by Mary @ Neat and Tidy at Saturday, December 19, 2009

Bless you Mary, you and your hubby have a beautiful family...from all that I 'read', I have come to love you as a friend! Have a wonderful weekend, the snow is here!

What a wise Momma you are!
I too~took this approach for the same reasons and now Boston's parents are doing the same.
You have a wonderful Christ filled week!
Christmas Blessings~
Carrie

Mary, we did the same thing! I feel as a Christian it is much more important to deliver a Christ-filled message for the holidays that we do celebrate. Everything that we do should point to Christ!
Merry Christmas as we celebrate Jesus!!

Good for you! There are so many who do not even know the true meaning of Christmas.... There is nothing wrong with the Santa Claus thing as long as the Giving and the Birth are strongly celebrated over him. We believed in Santa as children but we also knew the REAL reason for Christmas....Santa was just thrown in for fun!

This was what we chose to do, also. and never regretted it. I remember my daughter as a 4 year old playing along with an adult who asked her what "santee gonna bring ya" (we were in VA at the time), and she told her some toy. The lady again pressed a question of how was he gonna get in if we didn't have a chimney, and Lydia said, "Oh, he's not real. Daddy buys the toy, and Mommy wraps them."
I always felt that the world will tell the Santa stories, but we'll keep the Lord Jesus in our Christmas.
Thank you for sharing your faith today!

We too focused on Christ and now our oldest daughter is doing the same with her kids. Such a blessing to see something you did repeated.
Have a blessed Christmas!

I'm so thankful that you didn't tell us about Santa Claus. Christmas was always such a magical time at our house and one of my most cherished times of the year. You and Dad have always put on a wonderful Christmas. When we have kids one day, I plan to do just as you did. Put the focus on Christ - but the other stuff was just for fun. I do remember sticking my tooth under my pillow and winding up with a handful of change. :)

With a 4, 10 and 14 year old, we emphasis Christ as well and Santa is just for fun. Even my 4 year old knows we celebrate Christmas for Jesus' birth. There is not much talk about Santa around here and they all know that presents are from mom and dad. When my oldest child was much younger, I worried if I was doing the right thing since all my friends, even Christian friends, were emphasizing Santa. But I know we have done the right thing. They need to hear truth, hope and love that come from a Savior, not a man in a red suit!

Thanks for sharing of your heart, Mary! I wish you and your family a blessed Christmas surrounded by lots of love!

I think the best thing I read was the comment by your daughter(?) Mandi - what a testament to the great person you are!! I can only hope my kids would say the same thing about me some day (after these wonderful teen years of course!). Hope you have a wonderful Christmas ~ ♥

Mary, with so much emphasis on the Santa thing, I really admire you for staying strong & stressing the real reason for the season. Merry Christmas to you and yours, friend!! -Tammy

Thanks for dropping my my blog and leaving you kind comment. I was sorry about your Mom. You are right that holidays can be challenging, but I'm finding that writing / blogging helps a lot. I've had a look around your blog -- I'll be bookmarking it and coming back. Neat & Tidy -- one of my life long aspirations .

Mary, we did the same thing with our kids. We told them about St. Nicholas who was a real person and who had a giving spirit. We celebrated St. Nick's Day on Dec. 6th and we had fun with Santa, but he was not the focus of our Christmases. Just yesterday my son told his wife that he did not want their daughter (my grandgirl) to believe in Santa, but instead to focus on Jesus. So I guess our kids turned out fine without Santa and are passing the truth of Christ Jesus on to their children!

I'm so blessed to hear all these testimonies from your blog and all the comments. We too told our kids the truth. We taught them that God is the only one who knew everyone's name and had them all written in a book (the naughty and nice) and he could be everywhere and see all. The are all adults now married and have since been so immesurably blessed to hear their feedback that they always trusted that we would always tell them the truth and how some their friends where devastated when they found out it was all a lie. Our kids plan to raise their kids the same way. Christ. Born.Savior.Raised from the dead.Lord of all.Coming again. :)

Be blessed my friend. Thanks for your encouragement today.