So we had a great day at the cross stitch store! I almost got out with just picking up some floss and some odds and ends of scrap linen until Melissa found the pattern for this: 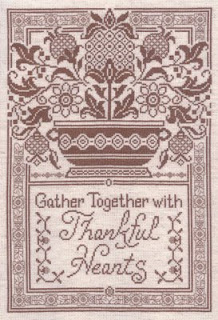 The pattern is Thankful Hearts by Diane Arthurs. The shop sample was done in DMC #4130 Mouline Color Variations in shades of red. It looks like overdyed floss in the sample. The shop owner said she thought regular DMC would be boring to work with after a while, so she made the switch. It is a beautiful stitchery, and the pattern actually looks a lot easier than this picture.

It'll be a stretch to even think of getting this done in time for Thanksgiving. I tend to work on projects during a particular season rather than have them done in time for the season, so this will be my project for fall.

Jenny and Randy were here for supper, so I passed some of the new linen to her with a pattern and some skeins. She was itching to stitch, and I was glad to give her some of my work.

Thank you to everyone for the encouraging emails in regard to my post about work and the economy in general. We will all get through this mess, and it's good to know that nothing escapes the attention of our Father.

Glad you had fun at the cross stitch shop! That is a lovely new pattern. I'm gonna try to find it! Really nice.

I enjoy spending rainy days baking and such too. There is always something to do in the home isn't there. There's no place like home that is for sure!

Enjoy the Lord's Day with those you love! Blessings!