Walking and running for the cause 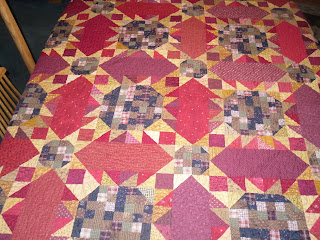 This is my sunflower quilt; it's a Buggy Barn pattern from an old American Patchwork and Quilting magazine. I love this quilt so much that quite often I use it on the dining room table (for decoration) in the fall instead of on a bed. It washes up really nice in case someone sets his coffee cup on it without thinking.

Saturday my daughter Jenny and I are participating in the Alzheimer's Memory Walk with the team from the nursing home my mother lives in. It's about a two-milk walk on the Bayfront Parkway along Lake Erie. Piece of cake.

In a couple weeks we will be doing an endurance run for Team Parkinsons, also along Lake Erie. An endurance run means just that - you set a goal for yourself and try to run it. My goal? One mile. Not so easy for me. I'm not much of a runner, I admit; but I do try to get some running in when I am outside walking for exercise. I can run 3/4 of a mile. Isn't that hilarious?! But when I remind myself that I could barely run between two telephone poles a few years ago, it's quite an accomplishment.

I've mentioned before that my dad had Parkinson's disease. My dear friend Angela also has it. She's a mom of four small children, a wife, and only in her mid 30's. You know the Scripture "let your light shine before men that they may see your good works"? Angela has a raging bonfire in her. The name of her team is Philippians 4:13. I am doing this so that someday there will be a cure. As much as I dislike running (yikes - in front of the Erie Runners Club for this race), I would like to know that there is research being done with the hope that Natalie, her little brother, and any other future grandchildren will live in a world where Parkinson's is just a memory.
Posted by Mary @ Neat and Tidy at Friday, September 25, 2009

I think they should let you run down hill all the way -- I just know you could do it. Your post reminds me how lucky we are to have our health. Doesn't matter how much money we have, how fine a house we live in or even how many quilts you have if your health fails and you can't enjoy any. Great exercise for worthy causes... Enjoy your weekend. Rain is predicted here -- Permission slips to quilt I say.

I am routing for you on your walk and run! I am not much of a runner either, Mary, but I do enjoy a good power walk. I feel like you will be doing this for my father-in-law too as he has Parkinson's.
Your quilt is just lovely, by the way! I would put that on my table too and enjoy if for autumn. Very nice!

May God bless you this weekend!

At Home With Amy said...

Your quilt is beautiful Mary. I take it you made it? God bless you and your daughter for what you are doing. Sometimes we forget how blessed we are and how unfortunate others may be. God will get you to your mile marker for sure. I will be praying for your friend as well. What a terrible disease to have and at such a young age.
Blessings to everyone,
AMY

Beautiful quilt! I like the idea of using it on the table. Good luck on your walk and run. My husband's aunt had Parkinson's.

That is such a lovely quilt. I would want it in a room where I could see it all the time, so putting it on a table is a good idea!

Mary, that quilt is one of the prettiest patterns I've ever seen. Just beautiful!

We have family & friends with both of those diseases. Our health is truly something to be thankful for. Blessings to you! -Tammy

Thank you so much Marylou. You have such a kind heart and are a great friend. I look forward to running with you and Jenny! We will make your Dad proud I know!
love ya and miss you!
Angela

Mary, I love your Sunflower quilt. The race will give your heart a boost and it is for a very good cause. Keep up the good work, we need a cure. Hugs, Jane

You are an amazing person, you know it?? I admire you so much for getting out there and doing something for a cause you believe in. Way to go. On another note, I LOVE the quilt as a tablecloth idea! That is so Fallish and so cute! Have a good weekend ~ ♥

Me again :) Today, for some reason, your e-mail doesn't like my e-mail (or vice-versa).. LOL! It keeps returning. So I will give you the names of my special Parkinson's people: my Great Aunt Pauline, and our ex-daughter-in-law's mother, Martha (just because our kids aren't together anymore doesn't mean I stopped caring ;-)).
Thank you again for your contributions for these deserving causes. Bless you! -Tammy

It's quite chilly here this am mid 50's. But I've got my coffee to warm me. I love the quilt and how you say if someone forgets and put "his" coffee cup down!

Beautiful quilt! I love Buggy Barn, but have never done one of their quilts. You have inspired me!

I lOVE this quilt....I want to make it! I'm so impressed with your running. All I can manage is to walk and sometime I actually do the stairs where I work instead of the elevator. :)

Your blog is so much fun!

Hi Mary -
I am so glad that you stopped by to say hi the other day - it is great to meet you! I look forward to getting to know you better through your blog. I LOVE your beautiful quilt! I love to quilt too - just have had to put it on the back burner for a time unitl I finish my nursing course - I am hoping the Lord will give me the strength and time to finish up some of the many quilt projects that I want to do when I get my degree ;-)

What a great cause to run/walk for! I work with many patients who have Parkinson's Disease. What a devastating disease it is! I too pray that one day they find a cure - as well as one for Alzheimer's.
Blessings on your day today,
Kymber