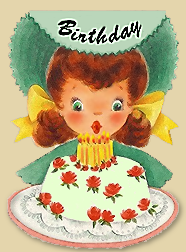 Today is stitch day. Audrey's birthday was earlier this week, so I'm breaking the "no food" rule; and we will be having cupcakes to celebrate. Jenny told me about a Barefoot Blogger who had several good cupcake recipes. She was listed below Jen's name, but she has been removed; so I can't give credit. But here's what I did for the cupcakes.

Following the box directions, make a recipe for chocolate cupcakes. I used Betty Crocker's chocolate fudge mix. Fill muffin papers half full. Using a teaspoon, drop a gob of caramel ice cream topping in the middle and sprinkle the caramel with chopped pecans. Top off with more cake mix; bake according to box directions.

For the frosting, I beat a half stick of butter (I use real butter), two cups of powdered sugar, one tablespoon of vanilla, one tablespoon of milk, and 1/2 cup of caramel ice cream topping. You may have to add more milk or powdered sugar for a good consistency. Frost the cupcakes and then sprinkle with more pecans. You could also drizzle melted chocolate on the frosting. 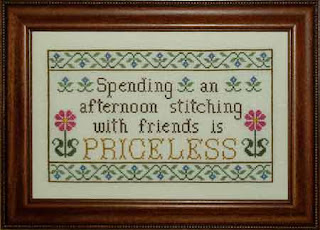 Added later: This is the link where I got the cupcake idea. The cupcakes were very good, but the caramel got absorbed into the batter or else sunk to the bottom of the cupcake. Next time I think I'll put in a caramel candy instead. Also the above stitchery is from Glory Bee. This isn't something I've stitched, but I think the sentiment sums up my day very well!
Posted by Mary @ Neat and Tidy at Sunday, May 03, 2009

Oh those cupcakes sound delish! And easy enough for me to make them. :) Have fun stitching!

What a great cupcake it was and what great gifts I got! Thank you so much!

The cupcakes sound yummy, even if the carmel did sink away! I love the stitchery and the thought that it brings to mind! Have a great evening!